A few years ago while at a piano concert performed by Julian Gargiulo, I met Denise Garrido.


She has been in the news recently. She was crowned Miss Universe Canada for a day only to find out that the judges miscalculated the points!


She has been on every radio show and TV talk show for the last 2 days. I must say she is very gracious in all her interviews...like a true Miss Universe! Commendable.

Through meeting the group (seen above), I was able to connect with the Diabetes Association spokes person from the Cayman Islands (C. Rowlandson) which is where Ad Maiora Canada and Ad Maiora (Verona) donated blue quilts for the newly diagnosed children.

I also became good friends with Julian. His music was the inspiration for one of my art pieces.

Posted by Sandra Reford at 6:12 PM No comments:

When I see a nice quilt that isn't too expensive and (usually) related to what I teach, I buy it. 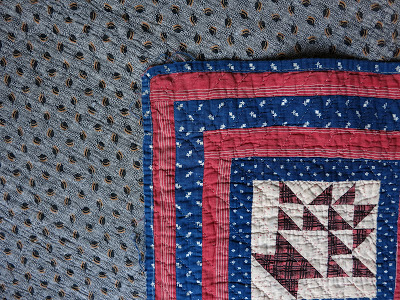 I do have a favorite spot where I buy. Barbara Griffin's antique store at the St Lawrence Market (north market on the west corner) in Toronto is a perfect spot for me.

The batting in this one is a wool blanket. You can see it in spots where the fabric has disintegrated.


Barbara was happy that they were going to someone who really appreciates them!

When I purchase a new textile I put it in a plastic bag and freeze it to kill all bugs. They say it is good to redo that once in a while.

Posted by Sandra Reford at 8:47 AM No comments:

Canadian Quilters' Association board of director member, Laine Canivet, was in Toronto recently.


She and I (and Marsha Cleveland, editor of The Canadian Quilter) have been communicating about articles for the magazine since the exhibit Tradition in Transition was invited to France.


The Summer Issue 2013 has an article entitled Definitely Canadian which is in large part the presentation I gave at the 18th Carrefour Européen du Patchwork Lecture Series.


A future issue will feature an article about Verona and their biennial textile festival. I will let you know when that gets published.


Laine and I met on Friday for a coffee at my favourite place, L'espresso. She wanted to see my studio which was full of cardboard boxes and bubble wrap and not much sewing. I plan to set up my sewing machine this week as I slowly send out the Mineral pieces that arrived from Europe last week and make more room in my head for creating!

What did I Miss?

I have been asking friends what I missed while I was away.

I did miss an installation by Katharine Harvey.


I saw her Waterfall piece in 2008 at Nuit Blanche in Toronto. 6000 pounds of recycled plastic bottles.

She made a chandelier out of plastic bottles in the First Canadian Place lobby which was exhibited till mid-May.


I would have loved to see it LIVE.
Posted by Sandra Reford at 8:00 AM 1 comment:

I am slowly getting back...mentally....to family life.


My sewing machine is still in the closet.
Posted by Sandra Reford at 1:48 PM No comments:

Is it good even when you don't know what to say? (I was hoping they'd cut that bit out!)


I was interviewed during Verona Tessile in Castelvecchio where Canadians McCavour and Brelih had their work exhibited.


You can see the 20 minute program by clicking here.


I can't wait to be with my family after two months away.
Posted by Sandra Reford at 10:05 PM 1 comment:

Mona Bismarck, 1897-1983, married five times, acquired money from her 3rd husband and took the title of countess from her 4th husband, founded many institutions including the one in Paris named after her, created to strengthen ties between the United States and France.

Until May 19 at the Mona Bismarck American Center for art and culture, you can view an exhibit of 25 antique quilts from the United States.

I enjoyed seeing the minute(!) quilt stitches, the perfect appliquéd circles of the Cherry Tree Quilt, 1925, by Naomi Beckwith, the signatures of the makers in 1889 on the Drunkard's Path blocks, the embroidered stitches in the Crazy Quilt fans on a black sateen background from 1900 and the fine netting carefully laid over the damaged fabrics of the pieced quilts.

My favourite quilt in the exhibit was the hot pink velvet, 6-inch squares set on-point, mixed with green velvet squares with the long, uneven quilt stitches in white coloured thread, going in no particular direction. It was free and unconstrained. It was a Gees Bend quilt with personality and interest. Not copied, not reproduced. Original.

Exhibited in the second gallery, gouache works by American artist, Zoe Pettijohn Schade, continued with the geometric form found in the antique patchworks. Since curating a few exhibits, I am becoming more aware of curators' choices. The paper works provided a contemporary counterpoint to the quilt exhibit.


And now for something completely different

I noticed this artwork on the way out of the Chanel No. 5 exhibit at the Palais de Tokyo.

The stain glass windows at the Cathedral in Tours are stunning! 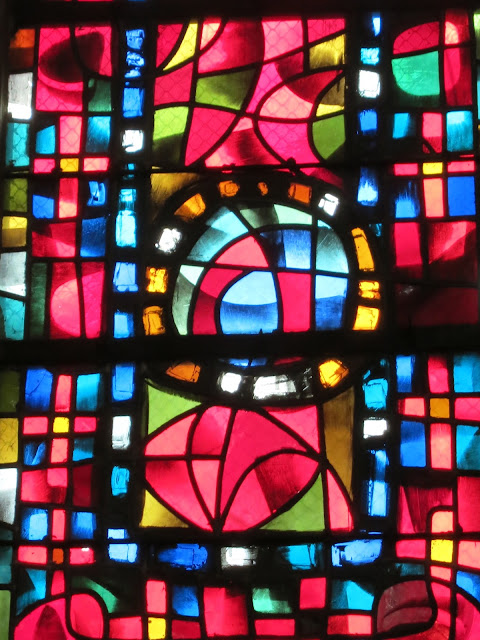 They say they are some of the best in the world. 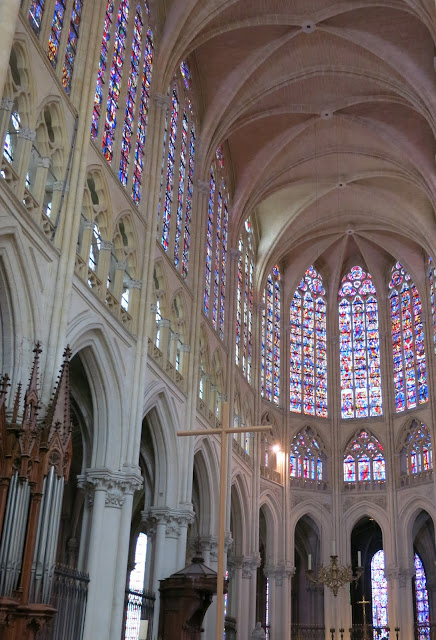 
There is some Renaissance architecture as well seen in one of the towers (right). 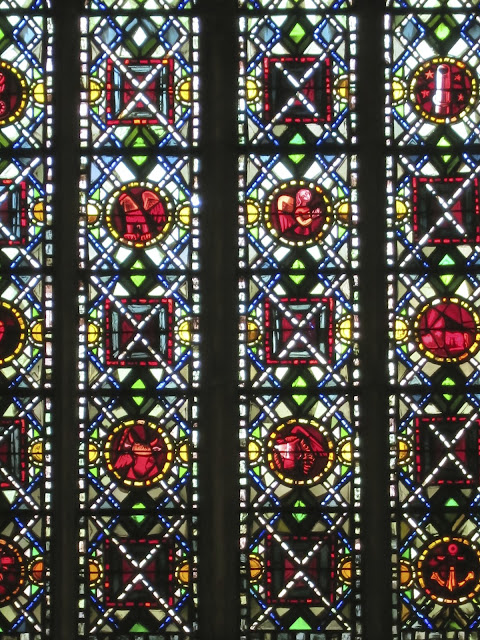 What an inspiration for a patchwork design. 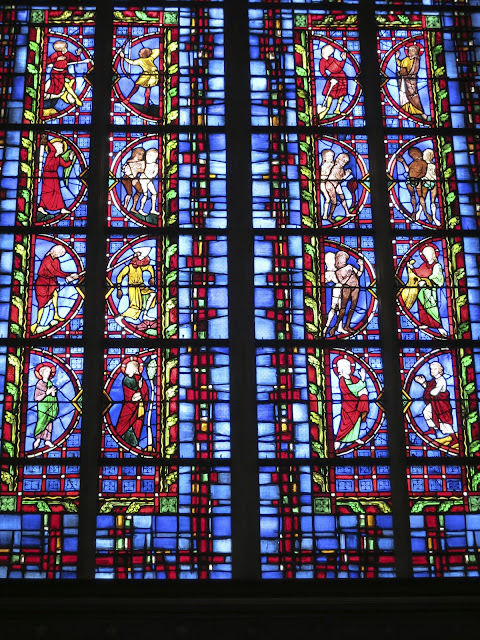 Look at the colours and shapes of the glass. 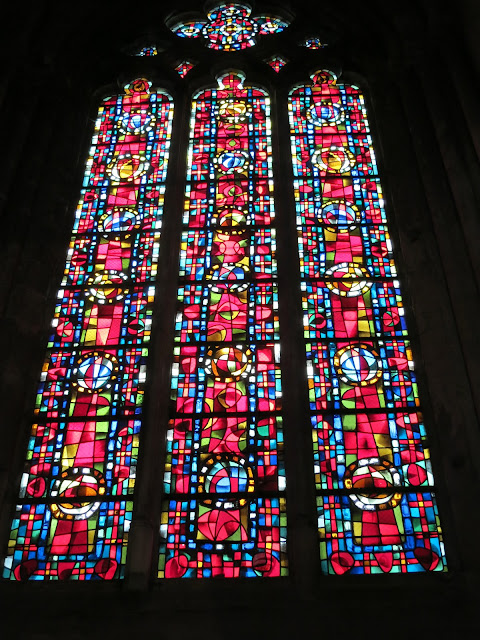 The red windows reminded me of Austrian quilter's work, Birgitt, that I met recently in Vienna.


Her quilt is hand pieced and hand quilted.

The label on the back was embroidered.

Posted by Sandra Reford at 1:11 AM No comments: 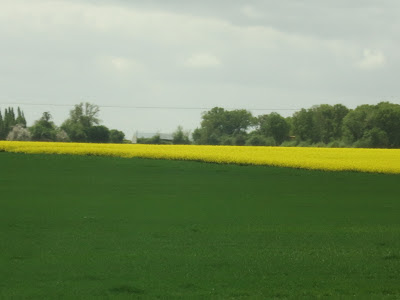 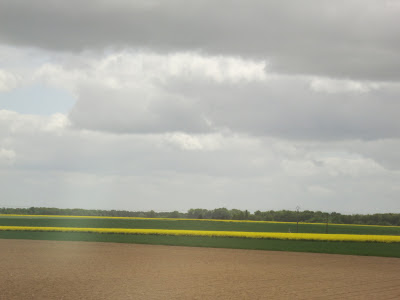 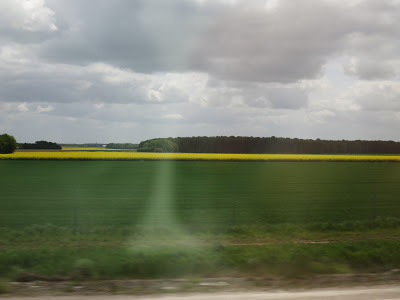 Posted by Sandra Reford at 1:06 PM No comments:

In Tours, there is a lovely quilt shop, La Petite Échelle, owned by Christiane Memain.

We have been communicating by email for several years...maybe 6!


Whenever I am in Tours her shop is closed. But on this trip, I got to meet her, finally!

She had time to show me some of her quilts.

While we were there, a jewellery designer walked in to purchase some fabric which she incorporates in her pieces. 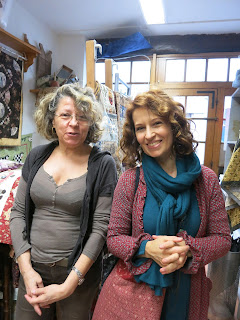 Christiane's shop is lovely. I miss touching fabric since I have been away from my studio for some time so today was a real treat for me!

Her shop is close to Place Plumereau. If you are ever in Tours - about 1 hour south of Paris with the TGV (fast train), I hope you stop in and visit her.


Posted by Sandra Reford at 8:53 AM No comments:

I spent a lovely day with Austrian quilters Lilo and Dani last week while I was in Vienna.


They took me out for lunch. They gave me some presents!


They took me back to Lilo's apartment for coffee and a little 'show and share'...


Later in the afternoon, I met many of the quilters from their guild. 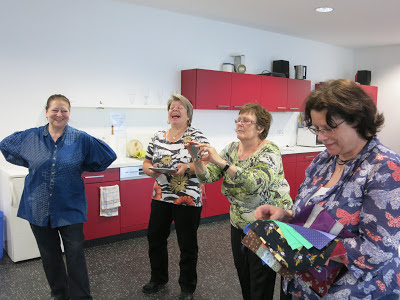 What impressed me the most about the group was the way they all create works together!


This week's project was a scrap quilt. Every member made one very large block. Those were cut in half and the job at the get-together was to decide on a pleasing design for the quilt top. 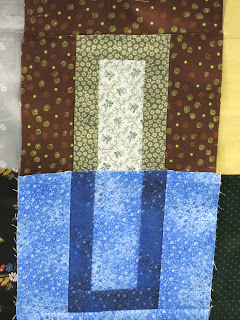 Everyone helped and made suggestions and in the end one of the ladies took the blocks home to sew them together.


It will most likely get quilted by Dani who has a long-arm machine. She told me she is a beginner but I can tell you she does amazing work, all free hand and all without marking the quilt. She uses the seams as an indicator when drawing with thread.


It really was a lovely day! Thank you to all the Patchwork Gruppe Wien members for welcoming me so warmly. Vielen Dank!!
Posted by Sandra Reford at 1:50 PM No comments: