I received my art work that was touring for the past 2 years.


"Radiation emits from objects at many different scales, from stars to atoms. This piece reflects my interpretation of emitted radiation waves interacting with other matter, including human bodies." (taken from the catalogue)

It is always nice to get things back.


The curator and her team packed up the work nicely. I usually roll my work. I was once told to avoid tubes for shipping because they often roll off trucks and belts. So I now use a long triangular box.


Oddly enough from Germany it was going to cost a fortune to send to Italy! So she put the triangle box into a square box and it cost much less.


Inside, there were a few treats! One of which was a catalogue of the exhibit and all the places it went (except for the last place as the opportunity came after the catalogue was printed.) 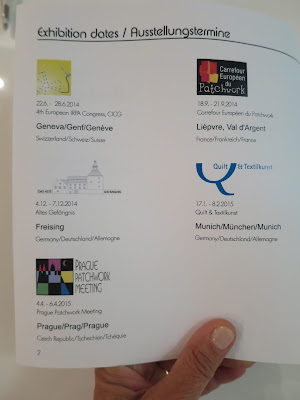 I liked many of the other works. I liked reading what the artists said about their work and its inspiration related to radiation. All works are 60cm x 120 cm, measurements set by the curator.


Without natural filters life on earth would be impossible.
When charged particles such as a proton pass through a cloud chamber they leave behind a trail of ions as they strike molecules of air along their path. Mist droplets form around these ions creating a cloud track.
Magnetic resonance images.
A chemical reaction transforms 95% of a firefly's energy into light and only 5% is set free as warmth. Up to now no form of man-made light has met this level of efficiency.


There was a CD of the show works. There were a few printed note cards, postcard size, and a thank you note from the curator.

Since it is in Italy, I am going to submit it for the Ad Maiora member exhibit which is happening in November, even though most of the other works will be traditional quilts.

Posted by Sandra Reford at 11:35 AM No comments:

I redid the cover collage. I like it better. 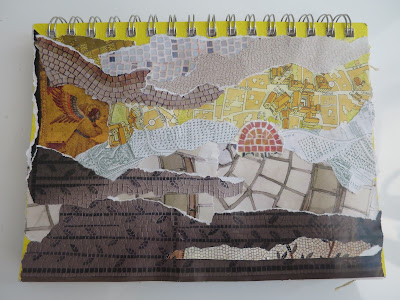 If you want to see the changes I made click here.

People should know that not all the works that artists make are good. There are a lot of tries before the good version is produced.

Her early models were shown alongside her ambitious sculptures.

Good to see. Also can be inspirational.

I wasn't able to really "get into it", my journalling, as I was running a trip!

But here in Verona I have gone back and added colour to some of the sketches,


Sitting in front of something and sketching it is better for the brain. You remember the place well when you go back and see the sketch.


For example, in one sketch I saw 3 shapes that reminded me of the cypress trees that are usually planted around the cemeteries. I automatically painted them green but then I remembered I had drawn three arches inside a wall! Had I been painting right in front of the scenery this wouldn't have happened. 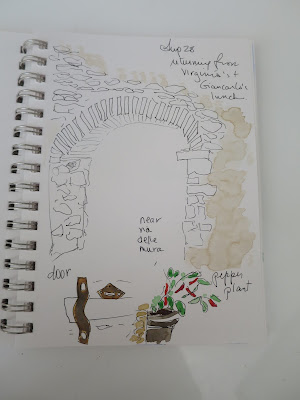 I worked on a weaving inspired by our afternoon where we learned about silk making during medieval times.

I worked on a collage.


heard from the other travellers that are still in Italy exploring on their own that they continue to sketch!


I am so happy about that.

It means they liked their sketching experience in Umbria.

(images of some of the pages of my Umbria journal, summer 2016)

Posted by Sandra Reford at 8:15 AM No comments:

Thanks for checking my blog while I and the group of 4 Canadians were on the Journalling Trip.

The travellers have a very good collection of memories in their journal. They definitely have plenty of ideas to pick from when creating their next art works- either quilted blankets or textile for the walls. 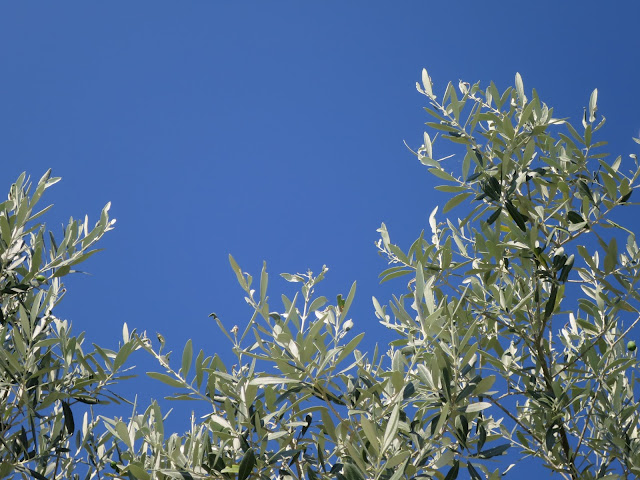 I am happy I had such a great group of ladies! That makes all the difference to the success of the trip. 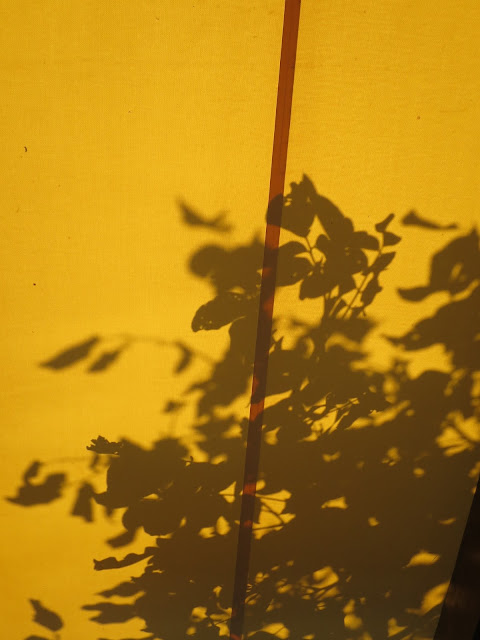 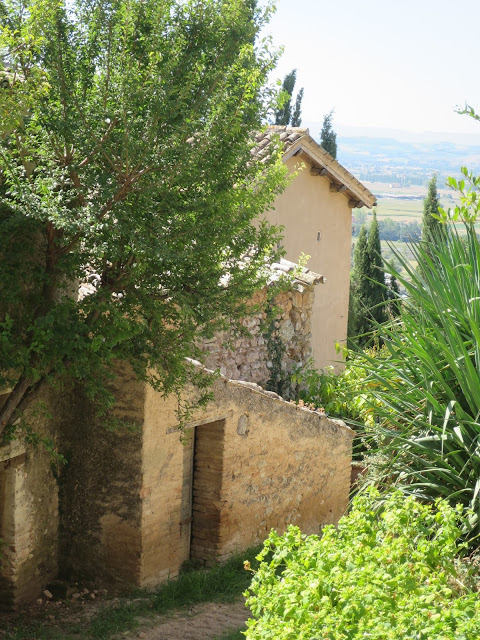 I leave you with these lovely colours of Umbria. 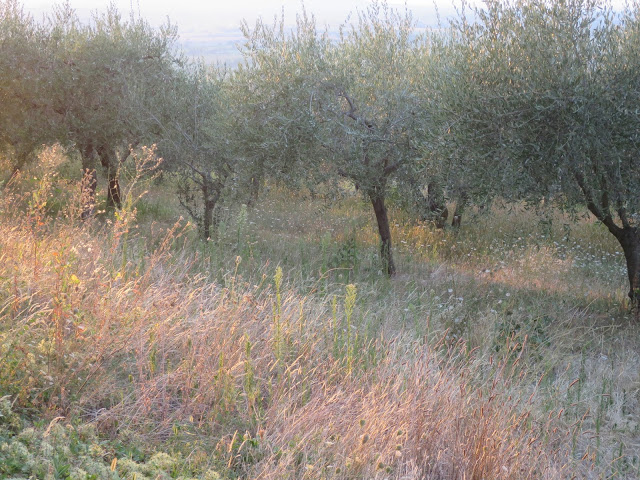 If you are reading this and wish you had participated then you can think about it for the summer of 2018. 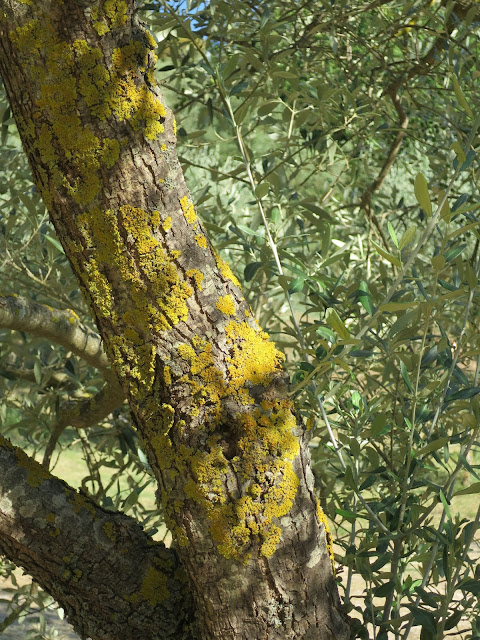 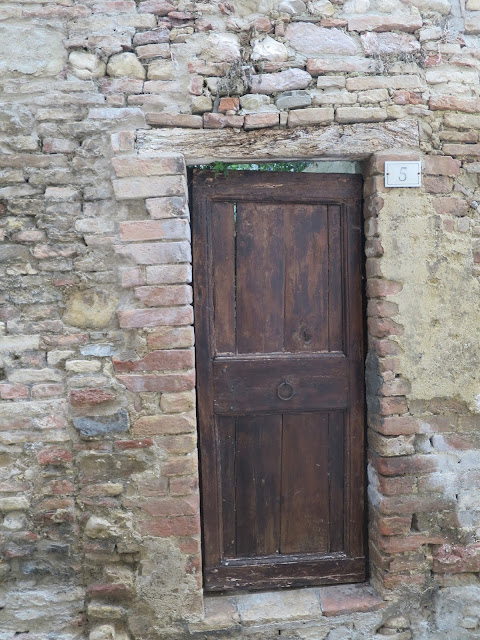 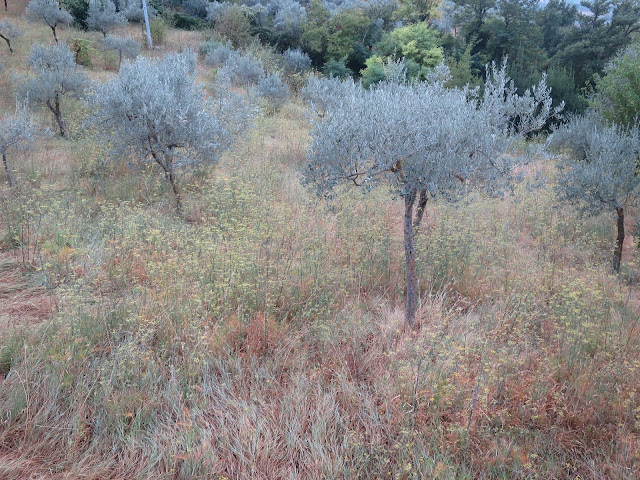 Read some testimonials from my travellers: 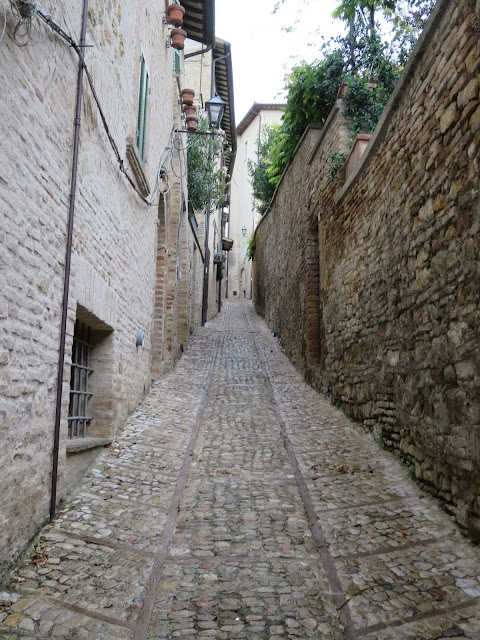 "It was a most amazing trip, in an amazing region of Italy! Sandra introduced us to fascinating people that we never otherwise would have spoken with. She packed each day with unique activities. The beautiful accommodations surrounded by olive trees, history and art. I highly recommend it!" (L.P.) 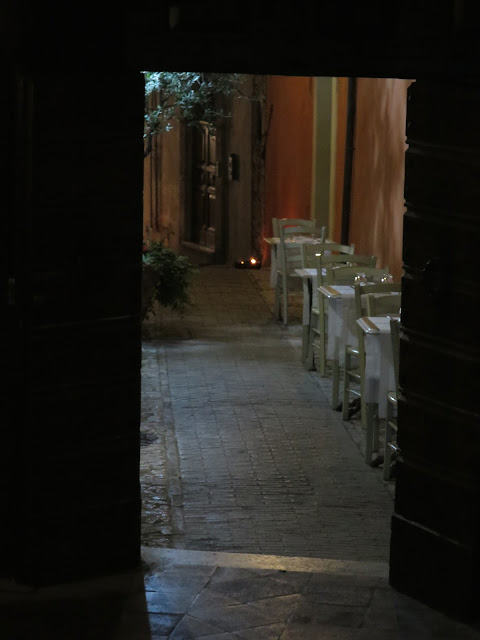 "I have travelled in Italy several times. Sandra’s trip was by far the best organized and most interesting trip I have experienced. Bravo Sandra! I can’t wait to travel with you again." (C.C.)

Remember that I also do a trip for quilters and textile artists in Verona, Italy.

The Mostra di Ricamo is held in Valtopina every year on the first weekend in September.

There are many booths where one can view the skilled workmanship of some very ancient embroidery and lace making techniques. 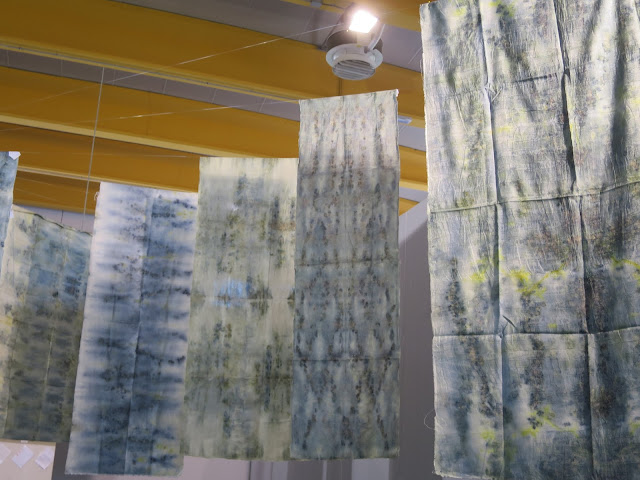 We also saw some innovative things.


There was some patchwork as well.


We walked over to the small but impressive Textile Museum to see the "Il Filo Infinito, la Pace" (Infinite Thread of Peace) exhibit curated by Elvira Guglielmi.

There were 2 other exhibits to see on the walk back to the main area.

We stayed on the grounds for lunch and were ready for our 3 pm class with art therapist, Tiziana Luciani. She is an author and works in Assisi and Milano as well as collaborates with a university in Venice. 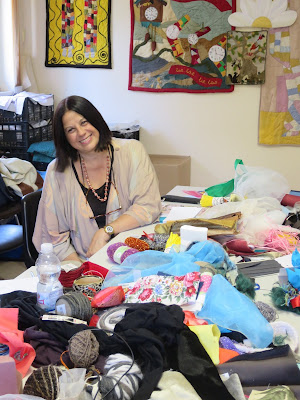 She taught an exhilarating workshop where we used the idea of a ball of yarn to express all the big moments in our lives. 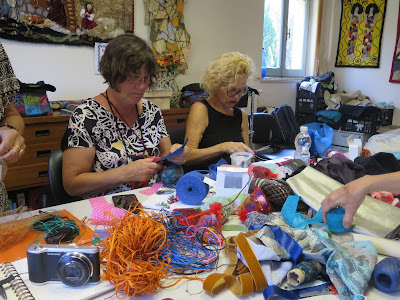 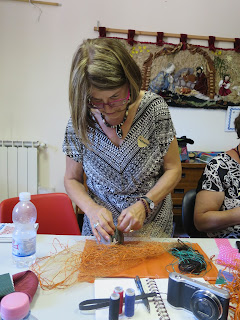 We had a full day once again.


Today is our last day, actually!  I can't believe we are leaving tomorrow morning!

People are packing as I write this. Outside there is some far away folk music.

We had a day immersed in the past! 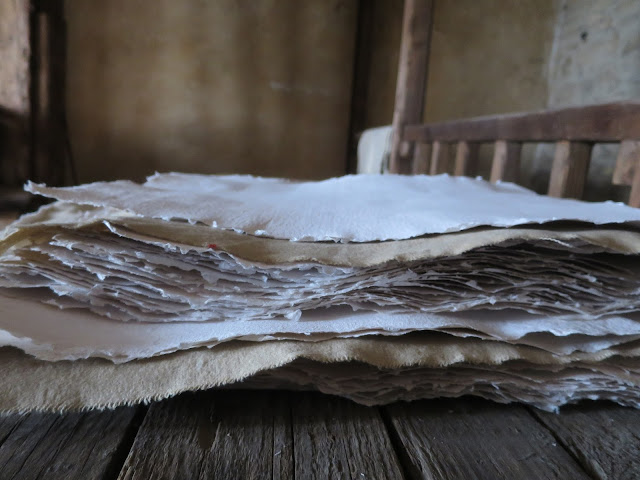 Bevagna was the location, a small walled town. The locals host a medieval fair, with costumes and food and  'careers' in medieval traditions at the end of June. So the town is set up for those kinds of presentations.

Francesco Proietto is the master paper maker in Bevagna.

The town of Fabriano is famous for its paper making. It is just north east of Bevagna. 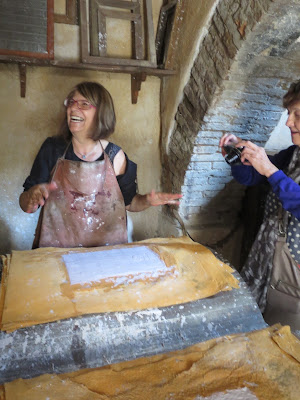 We had our hand at making paper using medieval tools which were remade to the exact specifications of the originals. 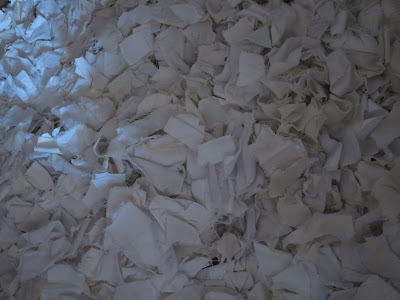 Originally rags were stripped and soaked and transformed into pulp which then became paper. It is linked to textile.

Signore Francesco's little shop had many gorgeous products to purchase, all hand made with such skill. Artegianale.

The next stop was Rita Trabalzo's silk shop. She demonstrated how silk thread was made using medieval tools from the year 1335. 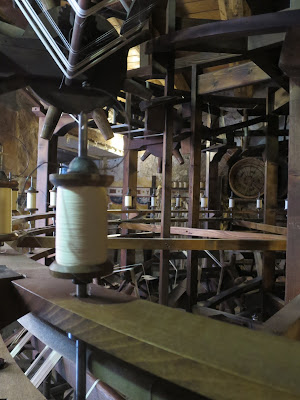 The exact same mechanism is used today but instead of having two women operate it, it is operated by machine. 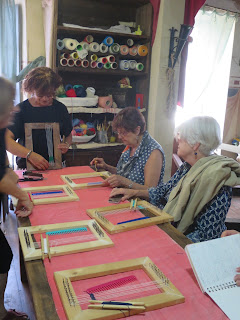 I think the travellers enjoyed these hands-on workshops. Says C...We certainly did! 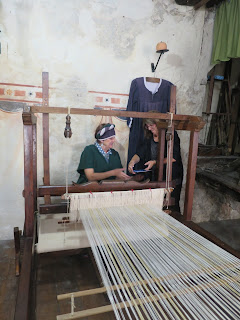 We had lunch in a small, shaded piazza. Typical fare. 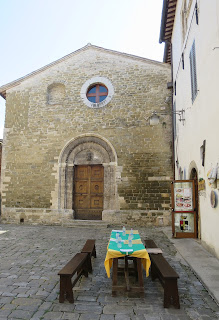 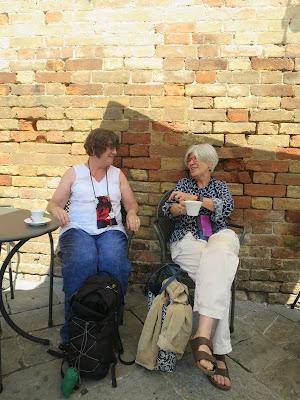 Instead of sketching we focused on collage since our morning was about paper. 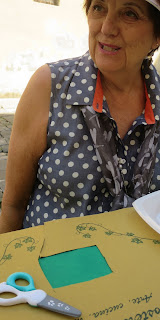 We made a quick stop at the famous church, Santa Maria Degli Angeli. 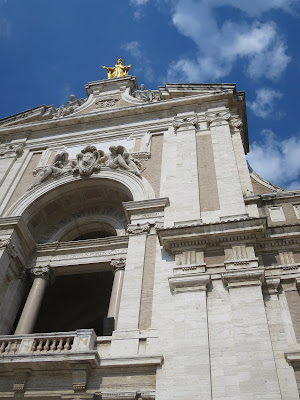 We had to go through security first!

Back at home we had a relaxing swim and a nice glass of wine!

Posted by Sandra Reford at 11:03 AM No comments: