When you make a quilt for someone special you put your heart in it.


I know from experience that, in general, people who do not make things or sew quilts have no concept of how much time and effort it takes to create something. I have even heard people say, Well it's cheaper if you make something...which it isn't as we know! 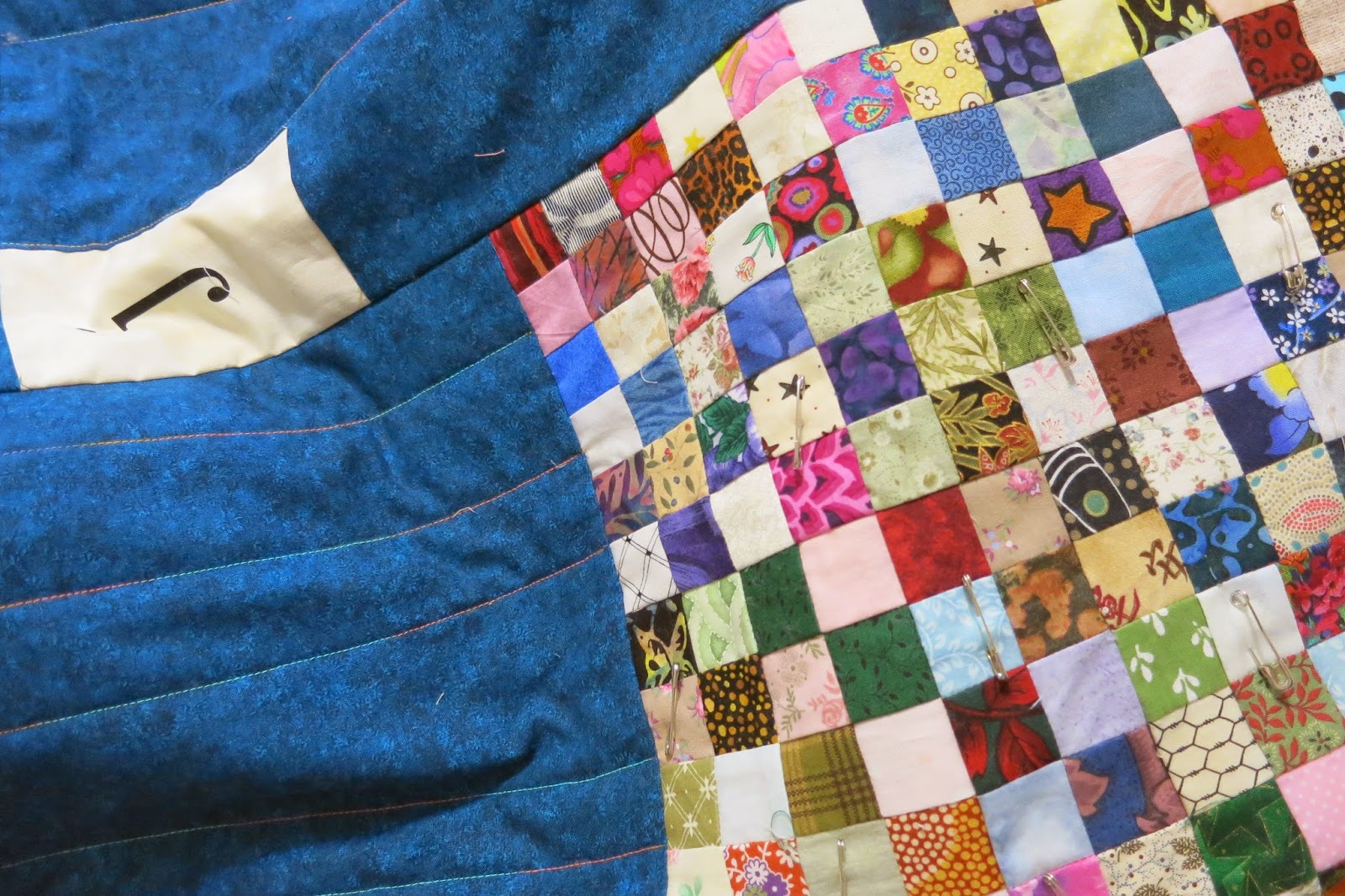 I made a special baby quilt for my cousin's first baby. In the card that accompanied it,  I explained what I designed for him.


I explained that it should be USED...how many times do recipients say it is too beautiful to use. I wrote, "It should be used for riding in strollers, for making tents, for reading under, for cuddling under with your mom and dad."

I proposed a few games. Using the 1 inch squares you could play "I Spy"... I spy a dotted line, a star, a letter B... or find two fabrics that are the same. 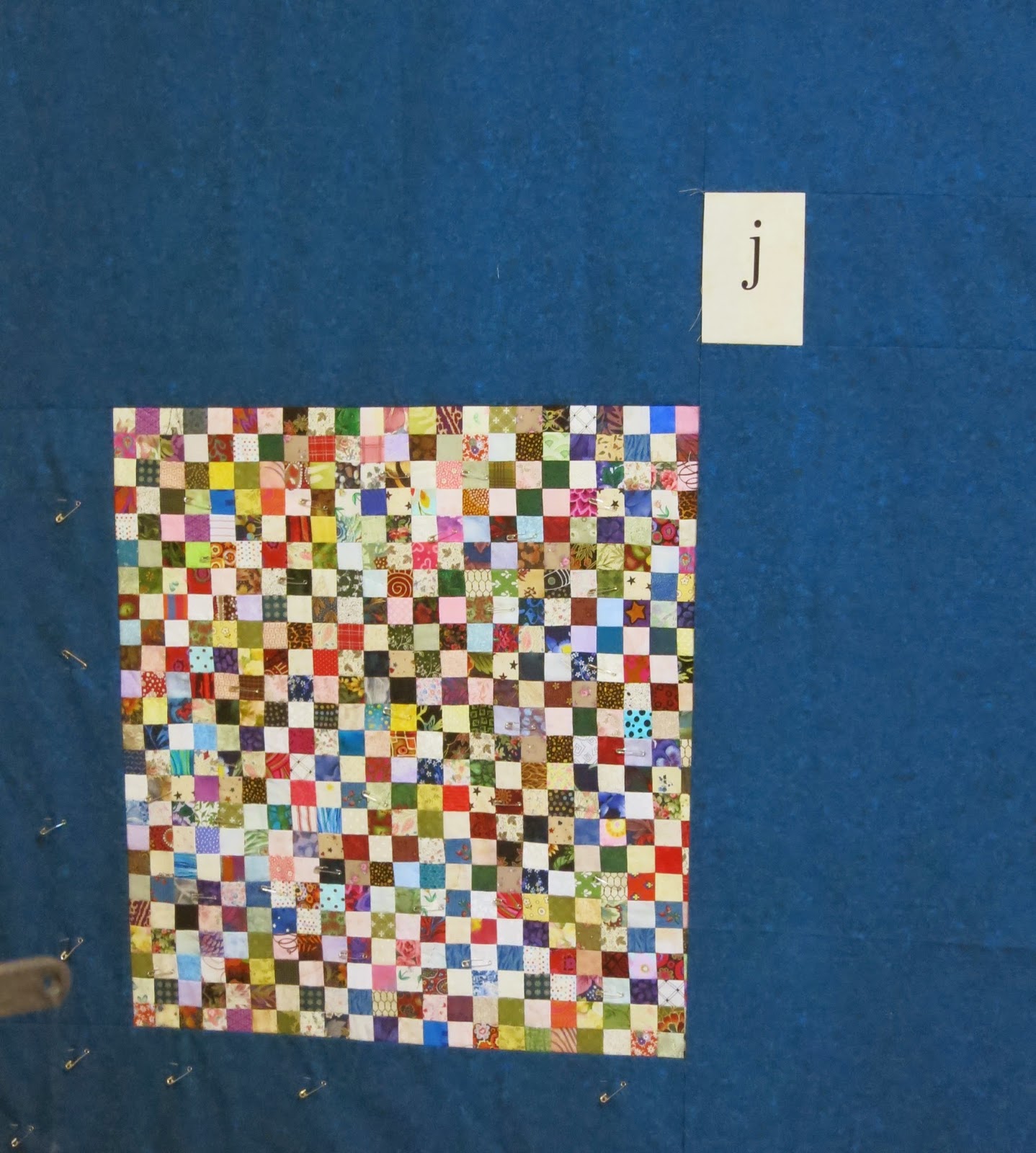 I made it personal. I added a 1 inch square of a map of Paris which is where his godmother lives. On the front, I placed a large letter J for his first name. On the back, I added a fat quarter which made a reference to his family name.


I also stated how many hours it took to make. People have a different level of appreciation once they know that!

Not everything an artist does "works out". Viewers only see what did work out. All the trying and redoing are part of an art piece that is rarely highlighted in an exhibit. 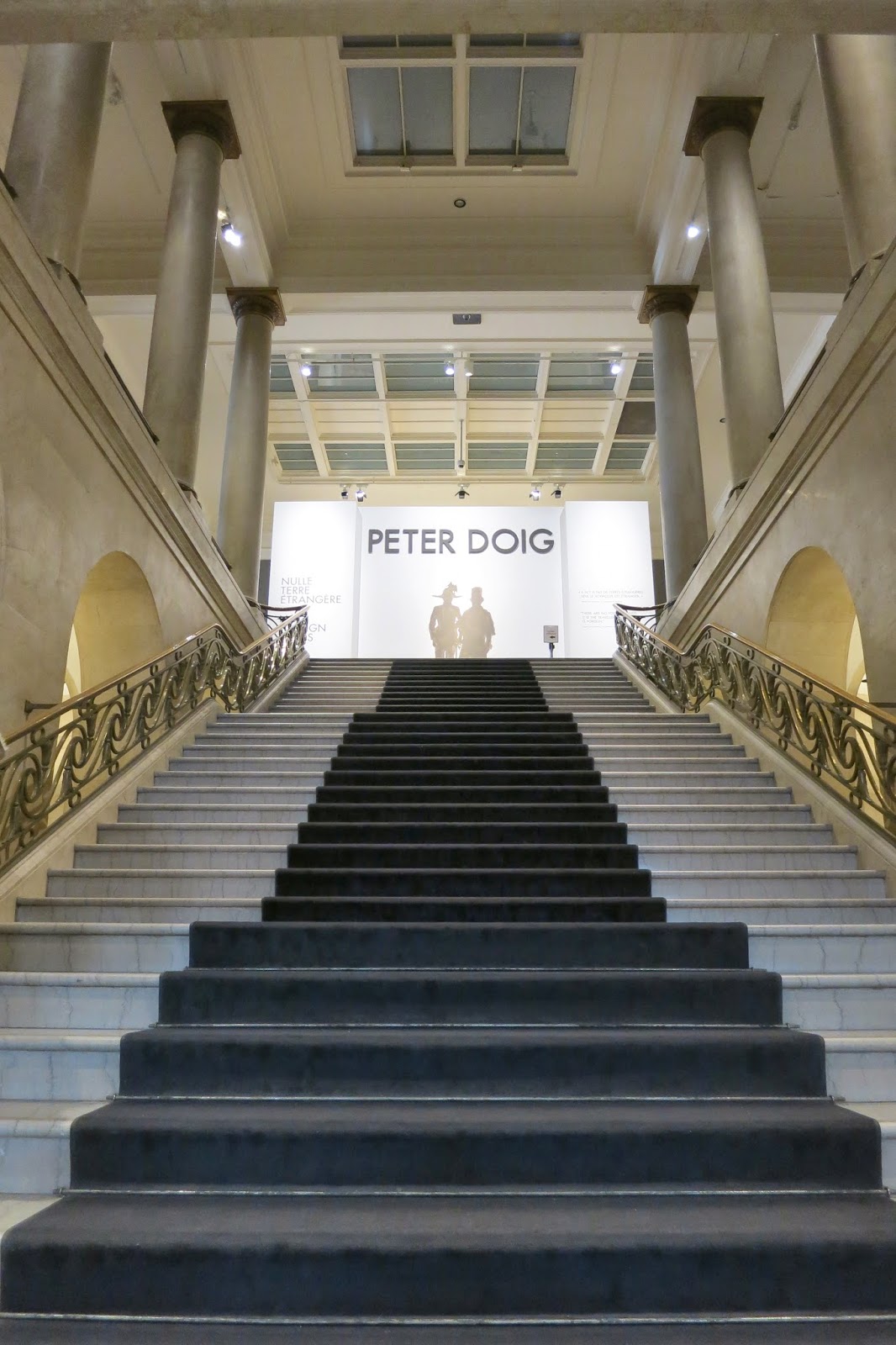 At the Peter Doig exhibit at the Musée des Beaux-Arts in Montreal, the curator chose to show the "backstage" stuff! It is an important part of the art, I think.

The subject was first photographed. 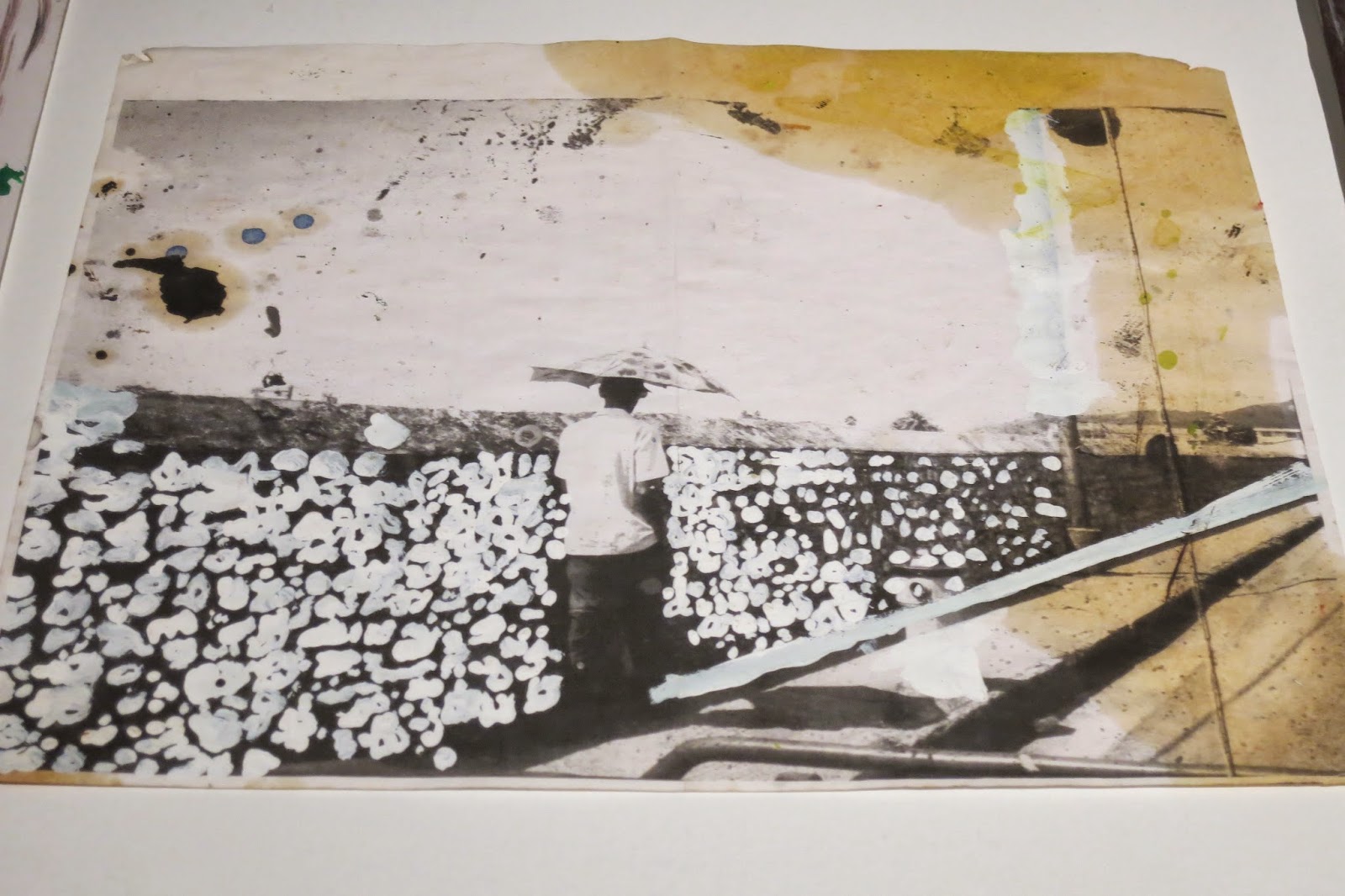 Sketches were done of different aspects of the photo. 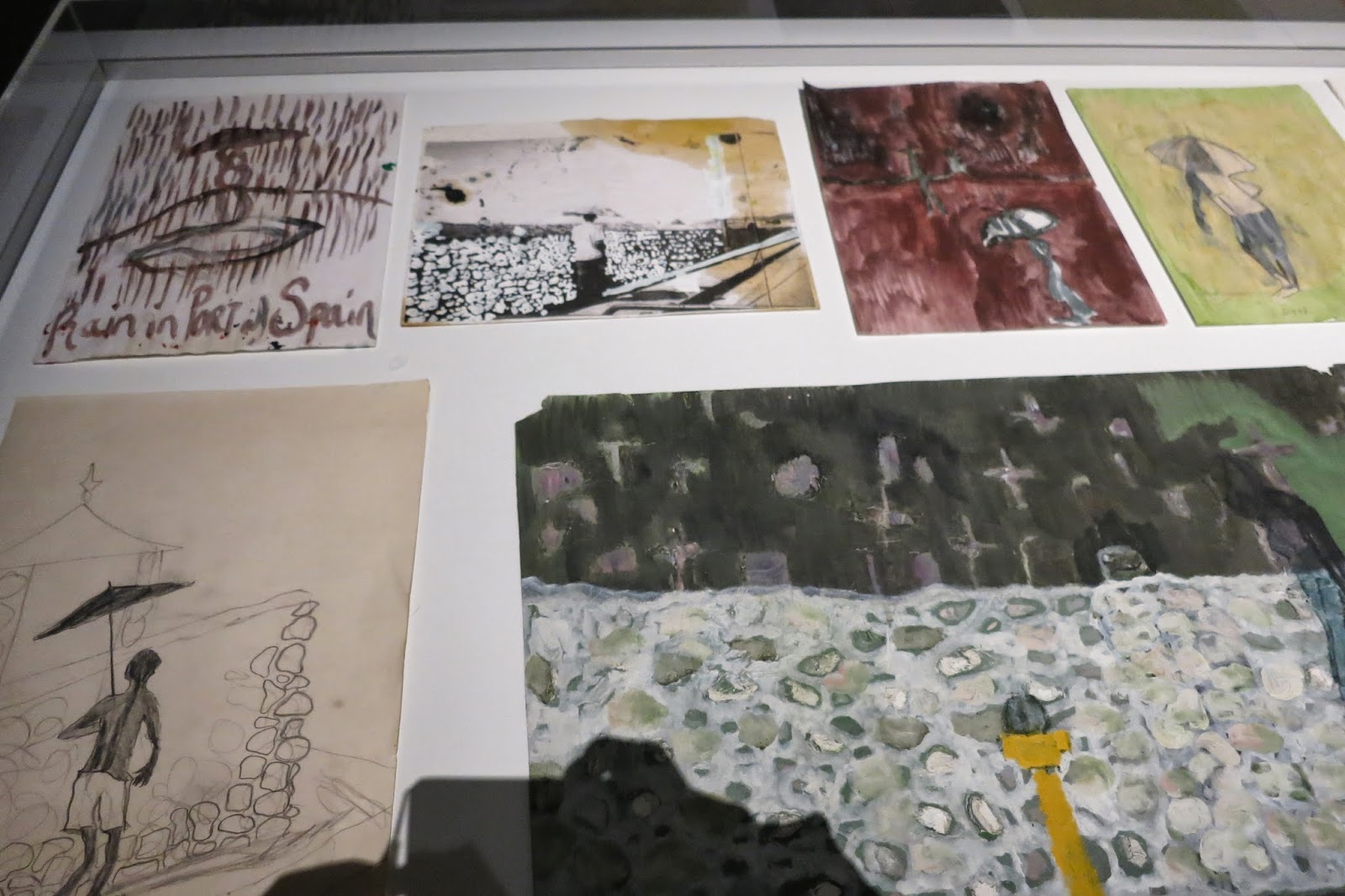 In his final rendition, Doig decided not to show what was behind the wall-the biggest cemetery in Port of Spain.


It inspired me to go ahead with my work and not get discouraged with a piece. That the "bad" works are still good because they help with the final piece. They help you decide what you want to do, what you want to show and how you will go about expressing that.


I am at the 3/4 mark in the development of a piece that will be exhibited in Geneva, Switzerland, in June. I think I still have some more undoing to do before it gets done to my liking.
Posted by Sandra Reford at 10:37 AM No comments:

Quilts at the MOMA

American artist Robert Rauschenberg (1925-2008) worked in COMBINES- works in which he affixed cast-off items to a traditional support.


They say that the bedding used in Bed was actually his own, making this a very intimate piece, almost as intimate as a self-portrait.

Using cast-off items is very much in my vein of thinking.

I have used discarded items before, even an antique quilt which was badly damaged when I got it. 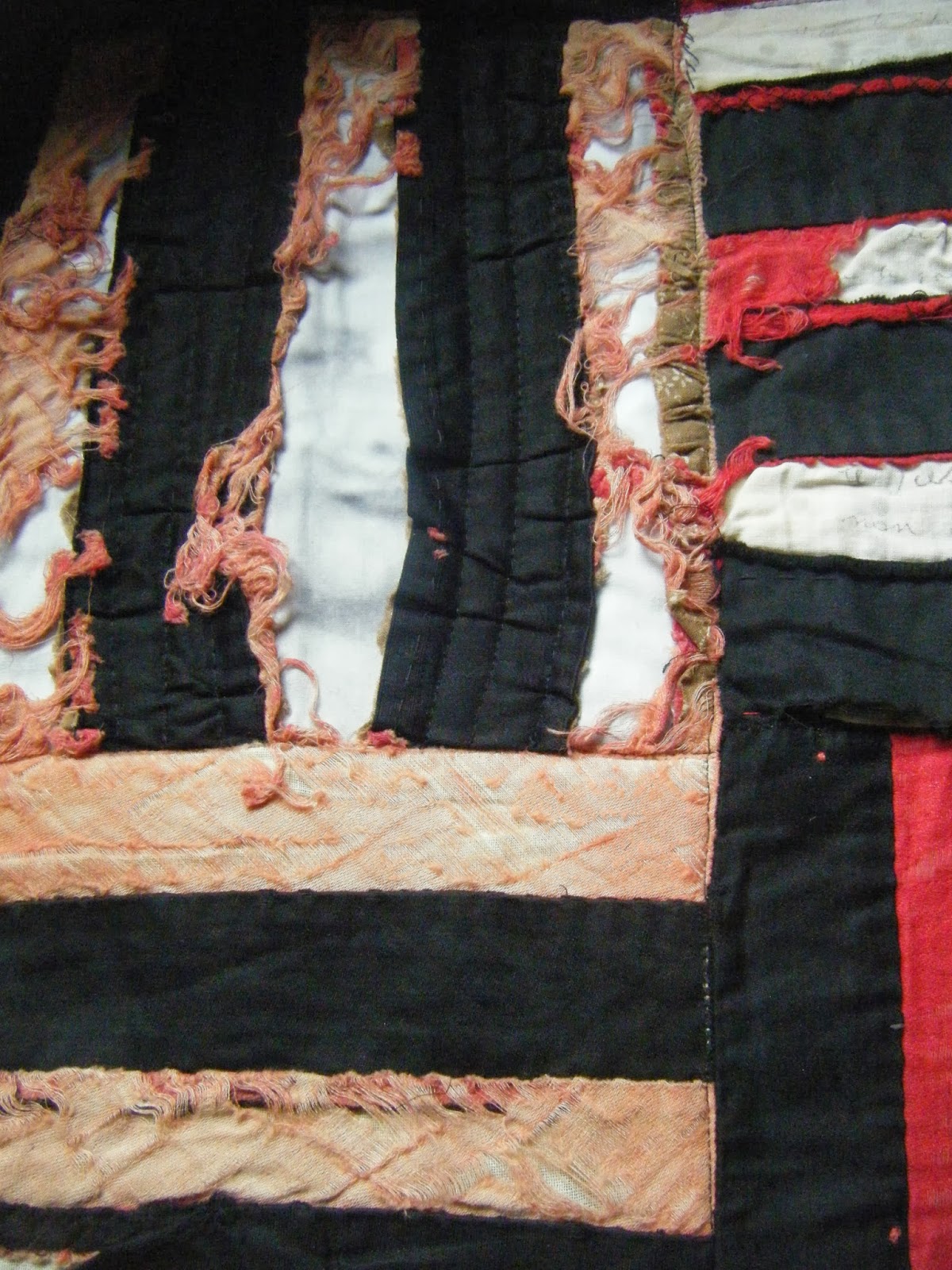 The previous owner had cut out a few blocks that were probably in better condition and my guess is  a pillow was made with them. 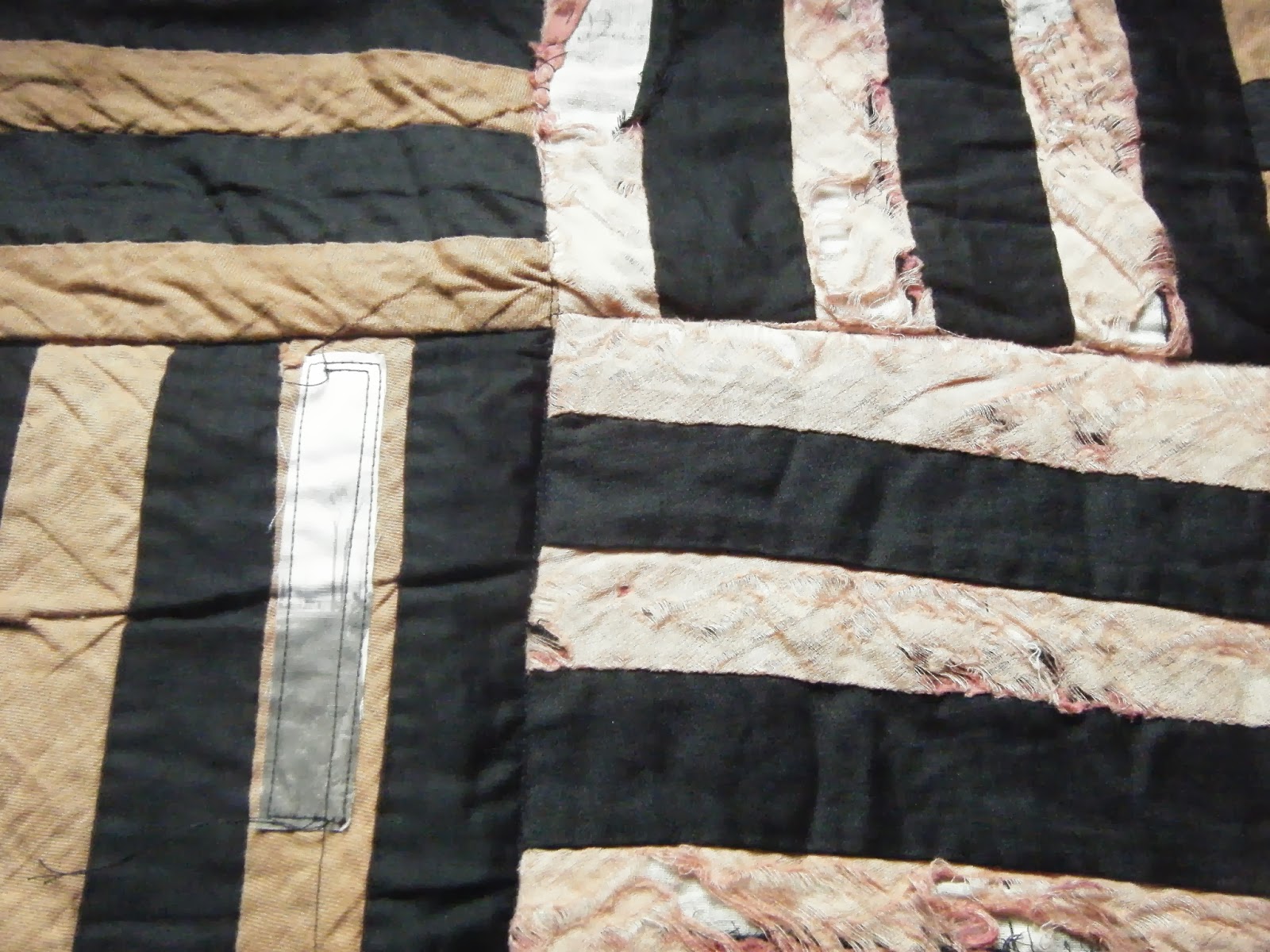 It is an homage to my grandmother.

She came to America and started working in a clothing factory in Montreal, Quebec, Canada. 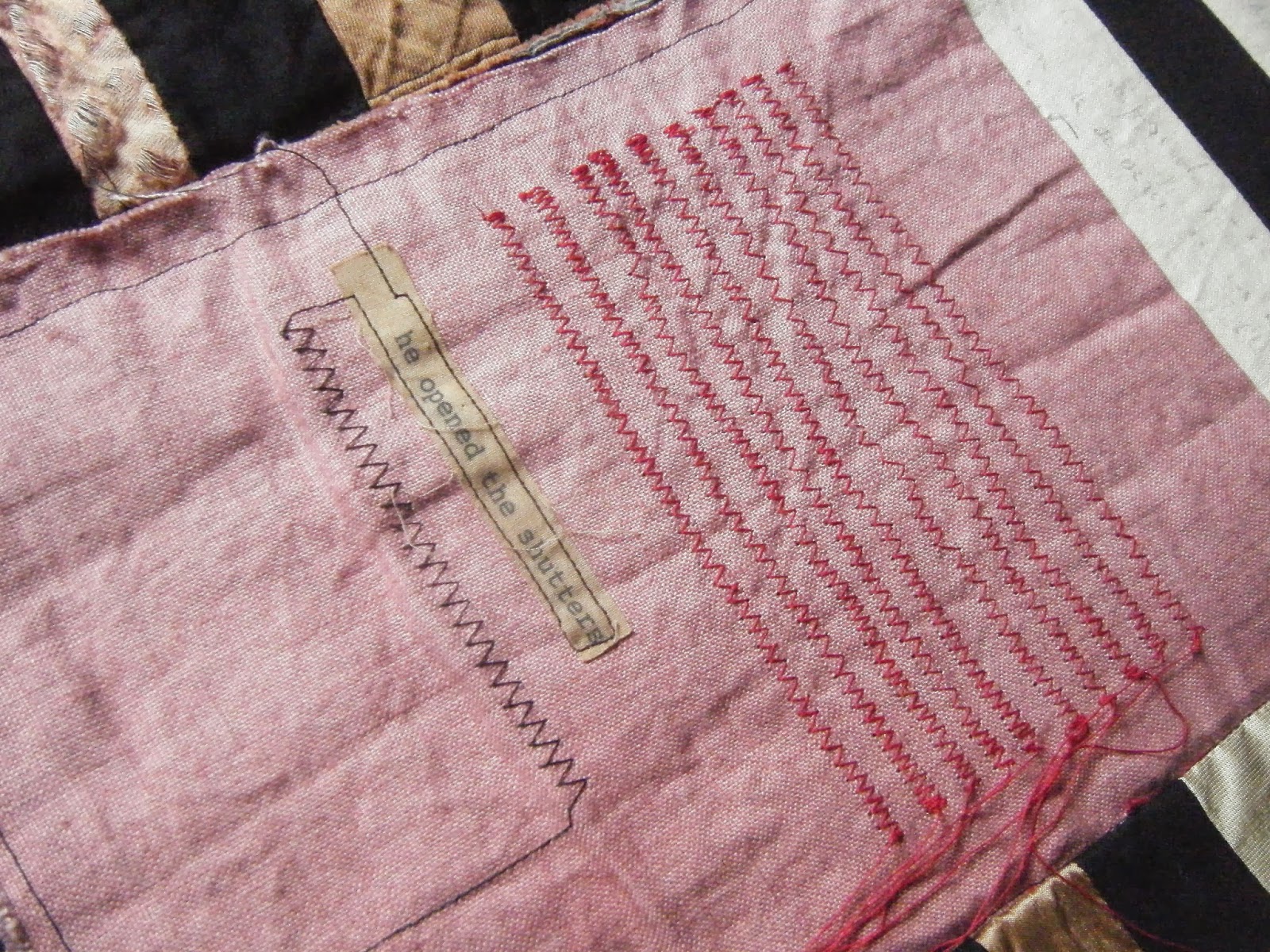 Her job was to embellish "mistakes" in clothing therefore using her creativity to hide the mistake. The one-of-a-kind garment was often sold for more money. 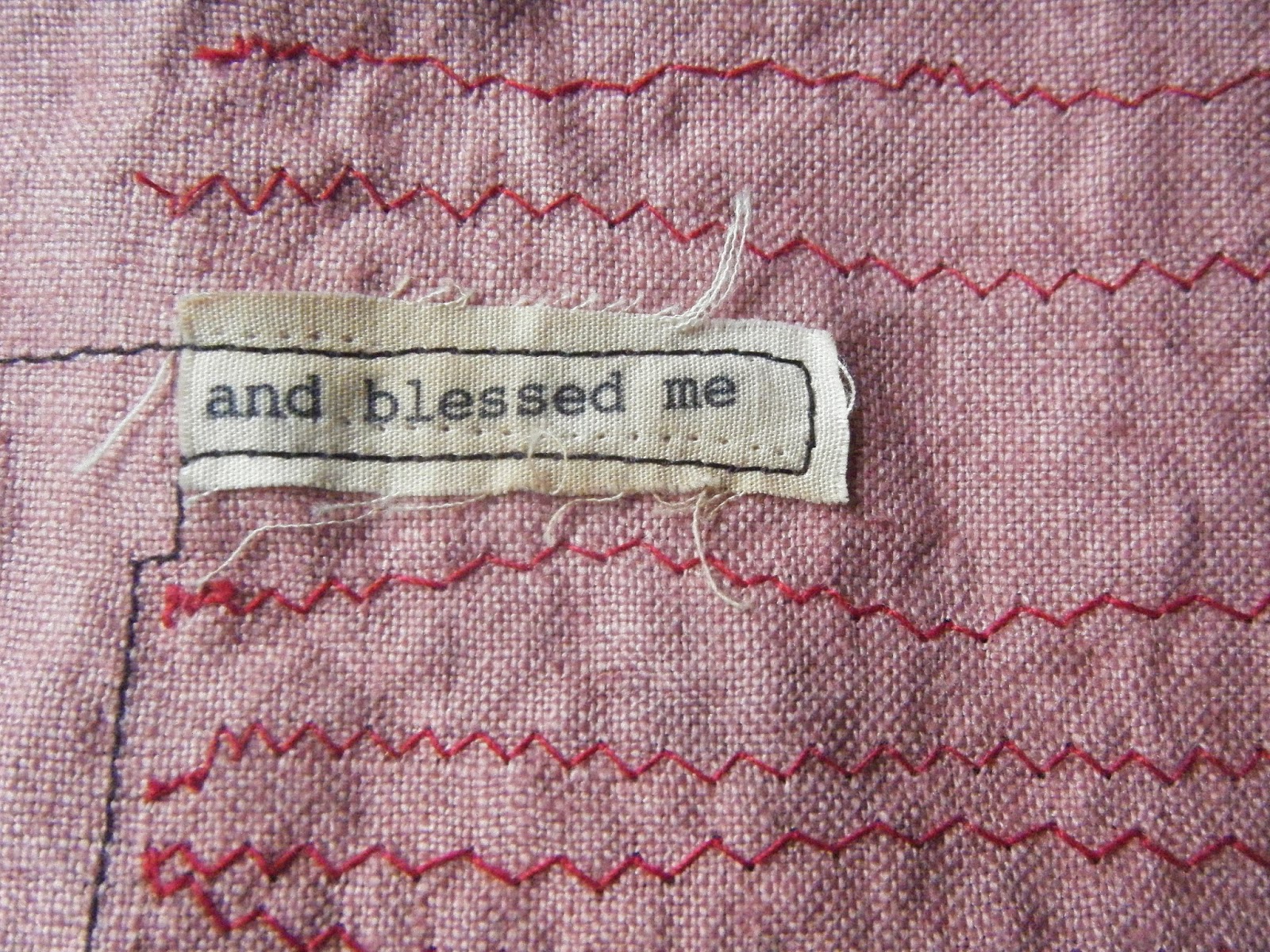 I repaired the quilt and in doing so told some of the story of her life.

Quilter Jeannie Jenkins has a picture of her quilt, Triumph of the Hexagons, printed on a phone case cover. Great idea!! (she did it on-line). That quilt was exhibited in France in 2012 as part of Tradition in Transition. 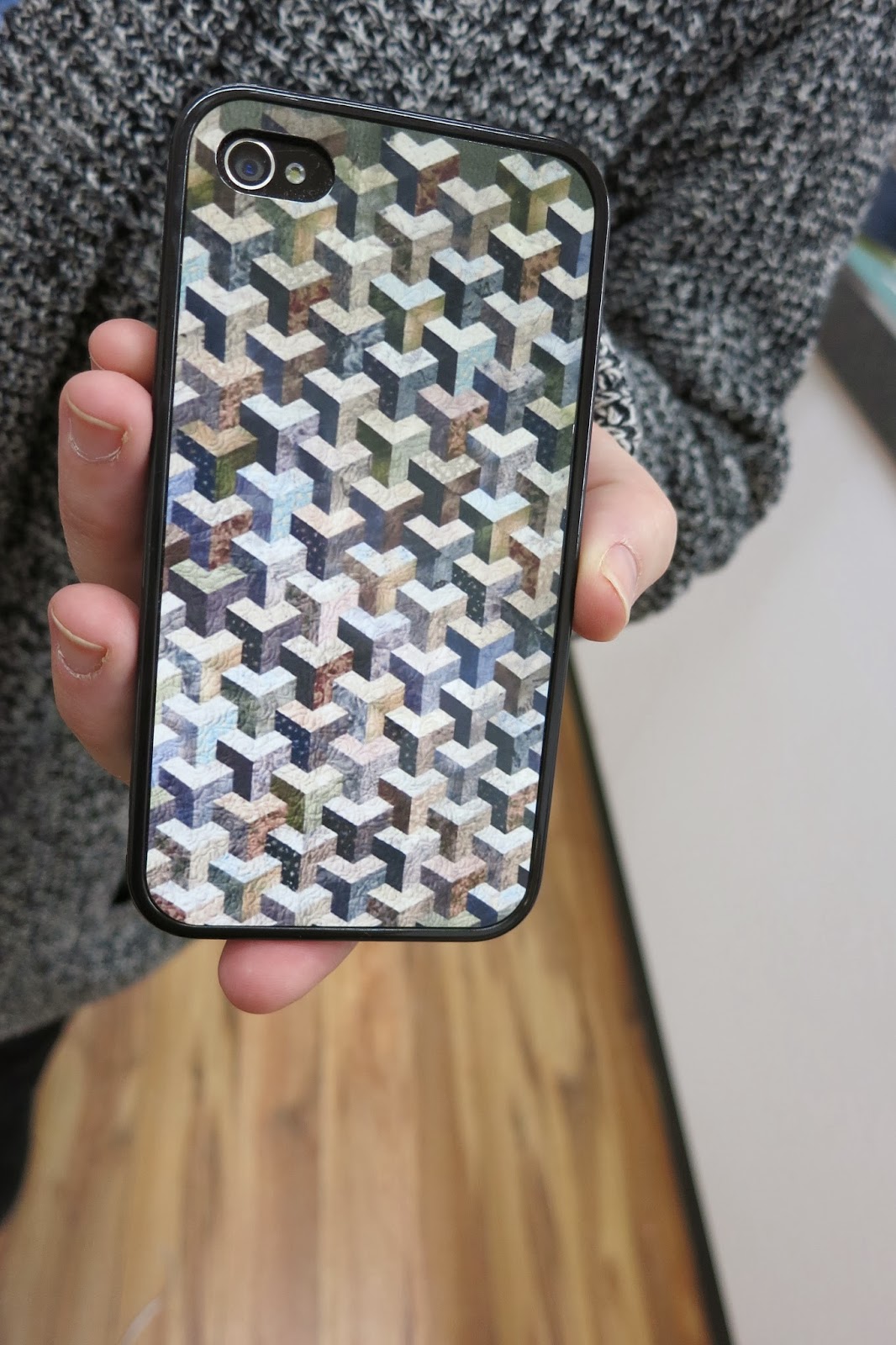 I took a class from her this weekend.


It has been a while since I have taken a quilt class so I did a spur-of-the-moment-sign-up for a Curved Piecing class at Sew Sisters.

I had a fun day, a ME day. I met some new people and connected with someone I had met a few years ago.


It is a good idea to change a coloured image of a scrap quilt to a black and white one to test your fabric values. 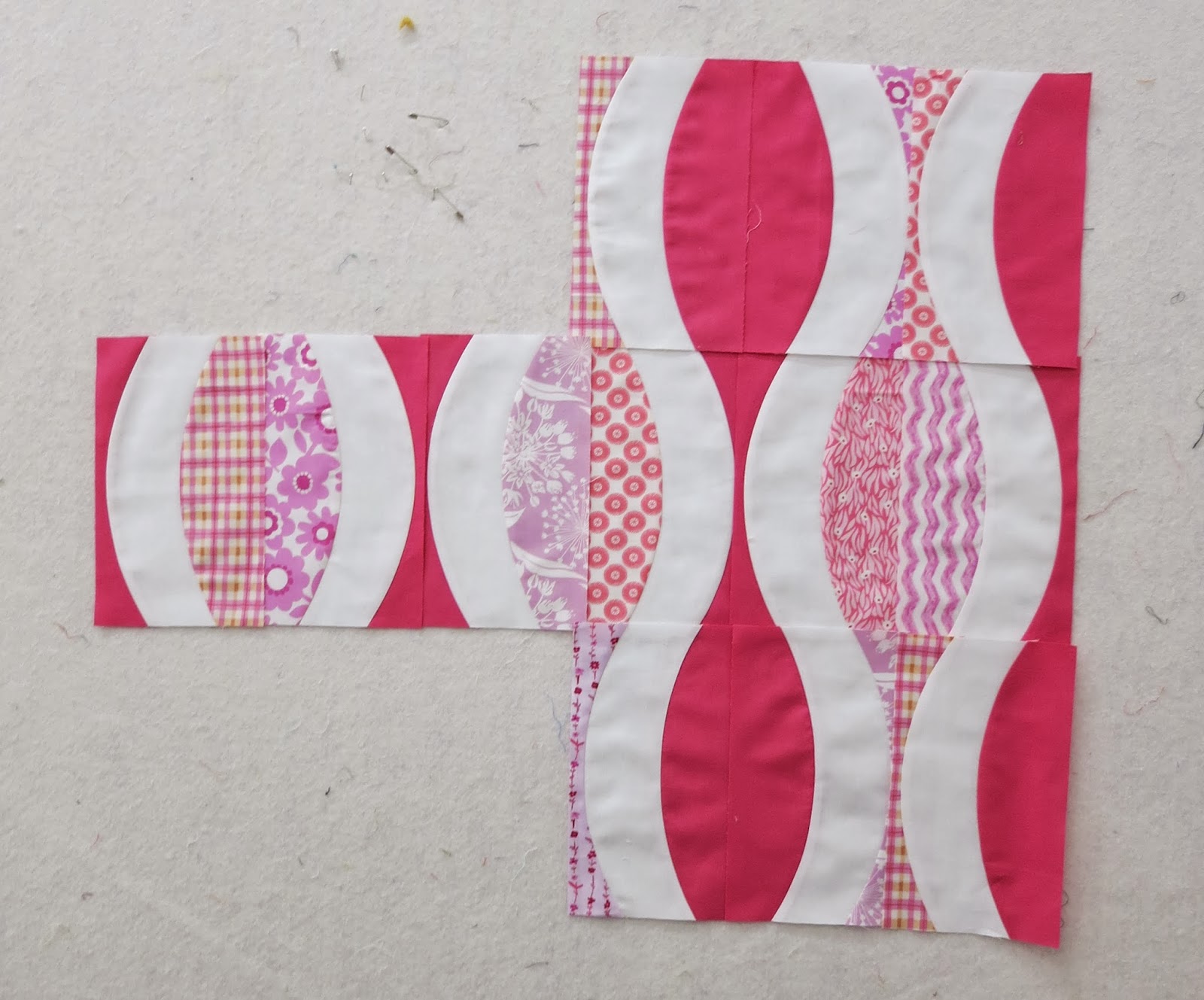 Using solids means your quilting has to be top notch, in my opinion! I can see with the Modern Quilt trend that people will have to brush up on their quilting skills. Either that or the long-arm quilters will be making a fortune.

Posted by Sandra Reford at 12:38 PM No comments:

I was invited to teach a textile workshop at a high school in Mississauga, west of Toronto. 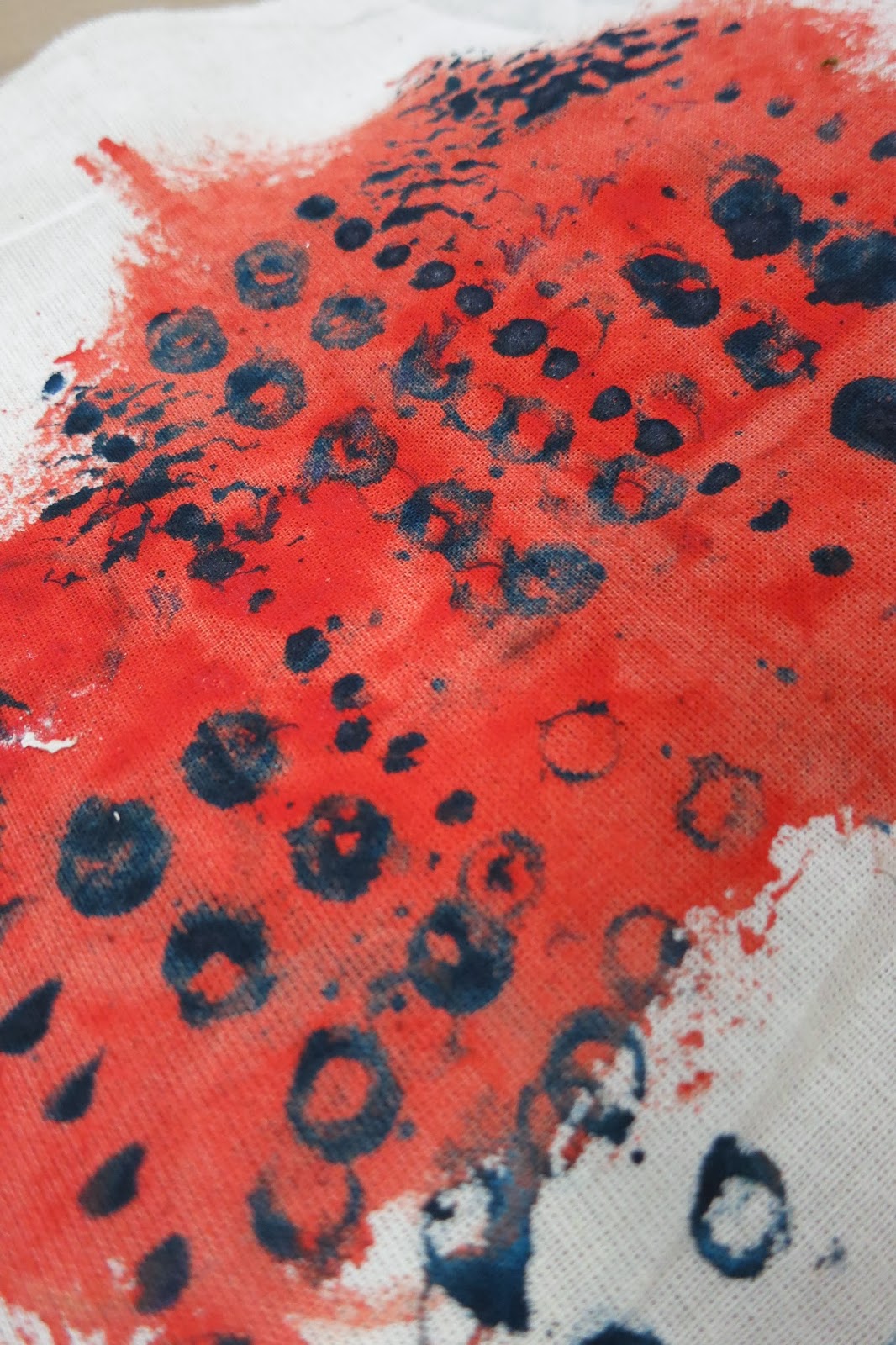 I taught a three-part workshop on Textile Art Expression. The students were from grade 10 and 12, between 15 and 17 years of age. 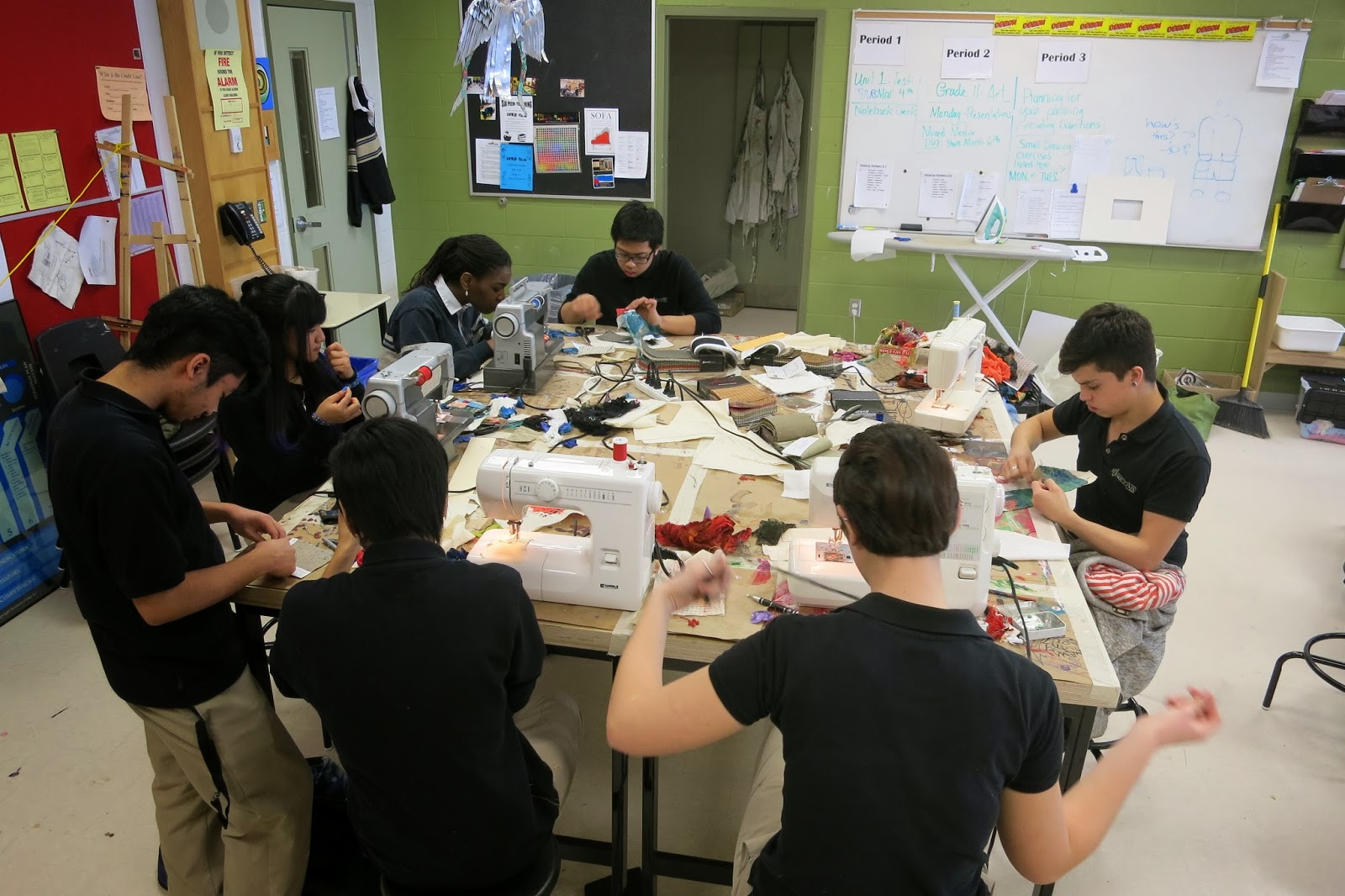 For many it was their first time using a sewing machine. They explored free motion stitching, hand stitching and fabric painting. They worked with Tyvek and soluble film.

It was a new medium for them. I compiled a list of Canadian and international textile artists they can research on-line. 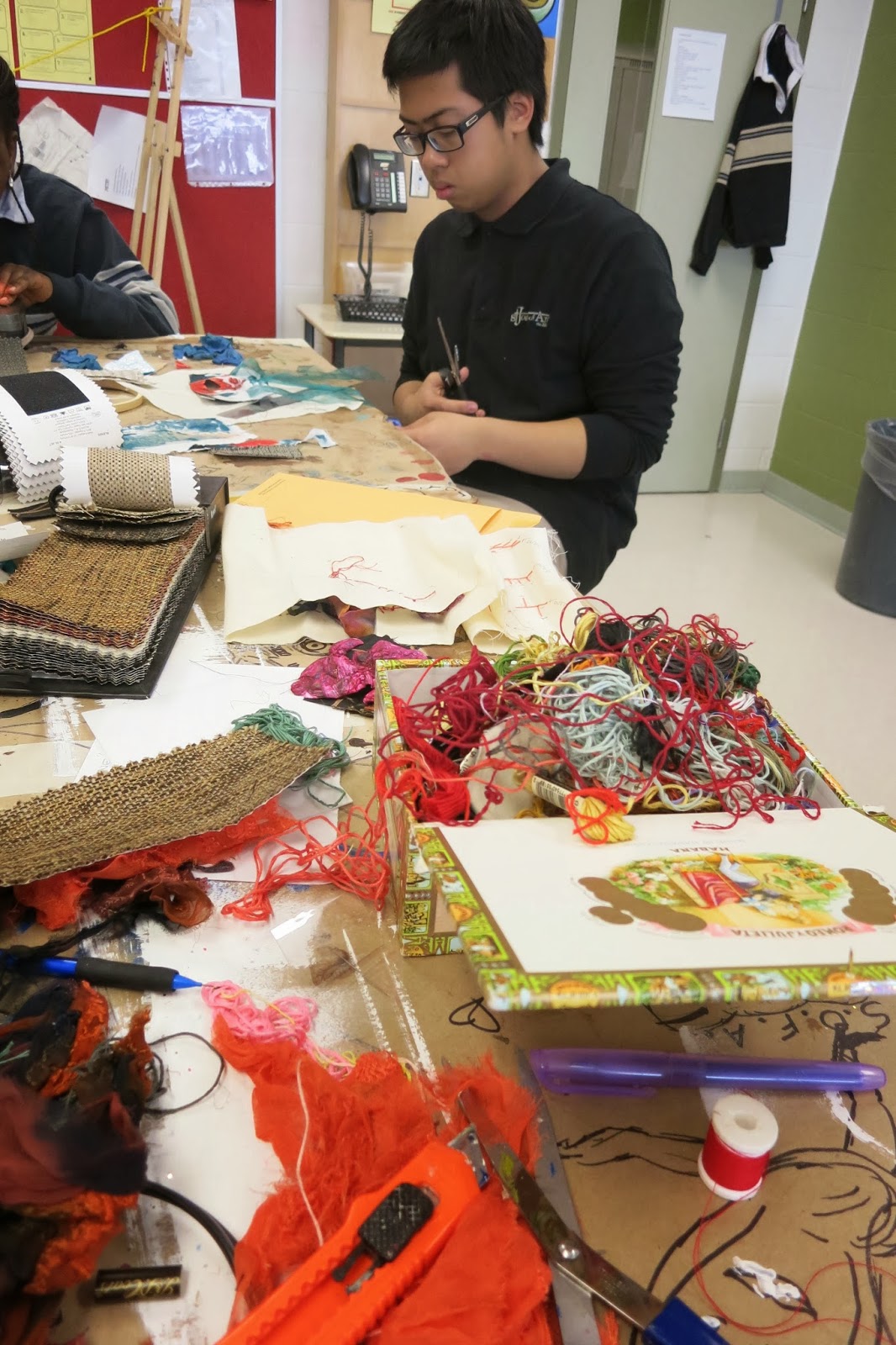 What makes my workshop a success is that all want to continue exploring.

The teacher wants to repeat this workshop next year and eventually have students at a level where they can create a cooperative textile work that can be considered for exhibit at the textile forum, Verona Tessile in 2015.